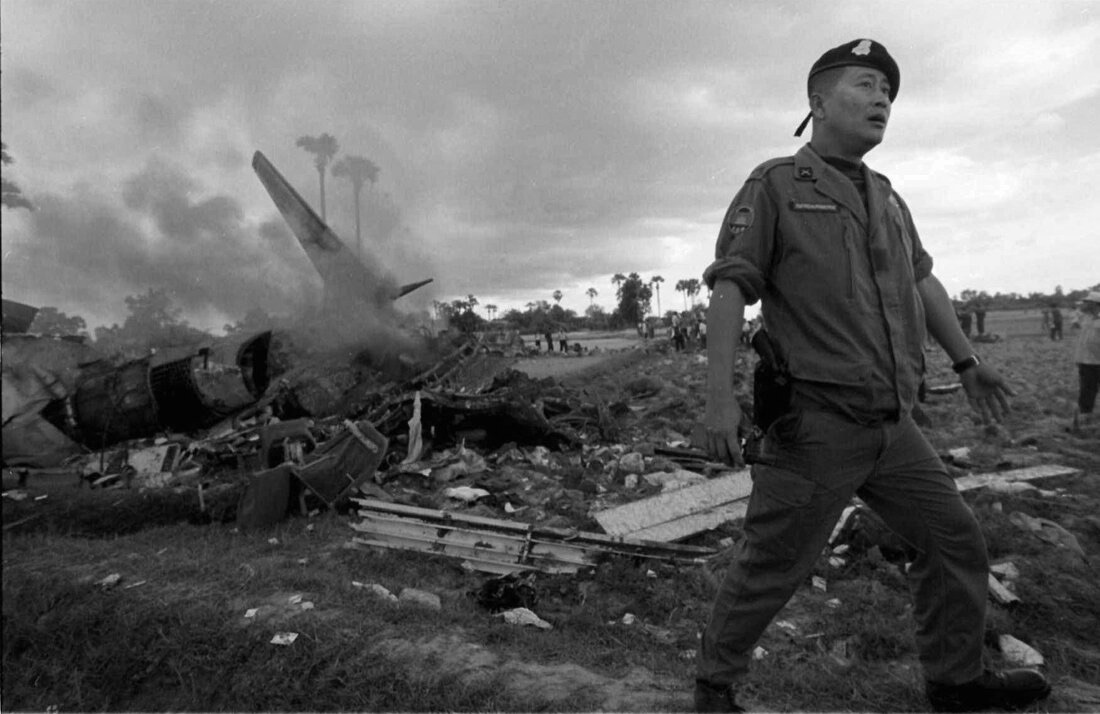 A Cambodian policeman walks past the wreckage of Vietnam Airlines flight VN 815 moments after it crashed at Phnom Penh airport.
Associated Press/David Longstreath
Across a dry rice paddy on the outskirts of Pochentong Airport in Phnom Penh, Cambodia, on Sept. 3, 1997, the bodies of the dead passengers lay strewn throughout the wreckage of Vietnam Airlines Flight 815 from Ho Chi Minh City. Seconds earlier, the pilot had failed to heed a warning from airport controllers to divert his landing. I was seated in the departure lounge of Thai Airways as the Tupolev Tu-134B made its final approach. I had been in Cambodia photographing the return of King Sihanouk and was on my way back to Bangkok when the crash occurred. At first, I heard the approaching jet and then watched as a waiting passenger killing time might do. I can't say with any certainty, but remember hearing the roar of jet engines taken to full power. There was something clearly wrong. The plane veered to the left. A split second later a fireball, a massive mushroom cloud of orange, red and black, filled the sky. Stunned onlookers shouted in Thai and Cambodian. I reached for my camera bag and while looking through plate glass windows, searched the tarmac for any emergency vehicles that might be going to the crash. Unlike now, international passengers in 1997 walked through a single door to the tarmac and then up a flight of portable stairs to their planes. The door was open with no security to stop me. As quickly as I could, I went out and hopped on the back of a rescue truck. The crash was the focus of the airport police.
I was an American dressed in black Levis and a black polo shirt. My Tony Lama cowboy boots were spit-shined to a high gloss. No one that day questioned me about why I was there. They just stepped aside as I and others headed to the crash scene. In less than three minutes, I was photographing the dead and dying at the scene. I have heard other photojournalists describe airplane crashes as "flying car accidents". But this was no auto wreck. This was a full-fledged "Bad JuJu" deal.
As it turned out, of the 65 crew members and passengers aboard the plane,
there was only one survivor, a 14-month-old boy -- Chanayuth Nim-anong -- from Thailand.
I had photographed the carnage of the Oklahoma City bombing two years earlier and was no stranger to seeing dead and dismembered people. I first heard about the rescue of Nim-anong as it was in progress.  I first heard about the rescue of the boy while it was in progress. The noise of men screaming and quickly moving around the wreckage grabbed my attention. It was either a survivor or a suitcase full of money. I was soon racing across a paddy field to photograph the scene.
As if almost on cue, a Cambodian man reached into the tangled mess of damaged airline seats and personal luggage and pulled out what looked from a distance to be a doll. The man was yelling and holding his discovery over his head as if to say "Look at the treasure." It was then that I realized it was a baby and that a rival news photographer, a freelancer for the French AFP agency was already there photographing the unfolding drama. "SHIT, SHIT, SHIT." I needed to be there shooting the scene fast. I made it just in time to fire off three frames as the child was shoved into the hands of Cambodian paramedics. It was all too incredible. First, the crash: Second: the race to the site aboard an emergency vehicle: Third: A survivor and my competition ahead of me.
My head was spinning. My emotions were all over the map. I tried several times to light up a Marlboro Red only to have the rain snuff out the cigarette. My hands were shaking now. As I smoked, trying to calm myself, I watched villagers carry off pieces of the plane including large chunks of aluminum and wiring. In several areas, the wreckage was still burning. The villagers also were stealing watches, rings, and wallets from the dead bodies. I left the scene, my once-shiny boots covered in mud, sweat running down my back, and hailed a motorcycle taxi. In broken Cambodian and pointing the way, I hustled to Phnom Penh's only qualified photo lab. When you shoot for a news wire, speed is king. Often being the first to transmit one's photos meant success. As I walked into the shop, the freelancer was holding a processed roll of film up to the light to see what he had. He was looking for "the shot," but I could sense things were wrong. He was grumbling, muttering to himself as if he had done something stupid. The shop keeper handed a second finished roll to him. He held it to the light, too, and scanned the negatives. "SHIT!" he yelled as he turned and left the shop.
I'm not sure what happened, but heard later through the rumor mill that the freelancer had blown the exposures. In the following days, the competitive play check was mostly my photos. This day, this spot news event changed my life in an instant.
Youtube has a video at this address:
https://youtu.be/rVL5PfhyDE8 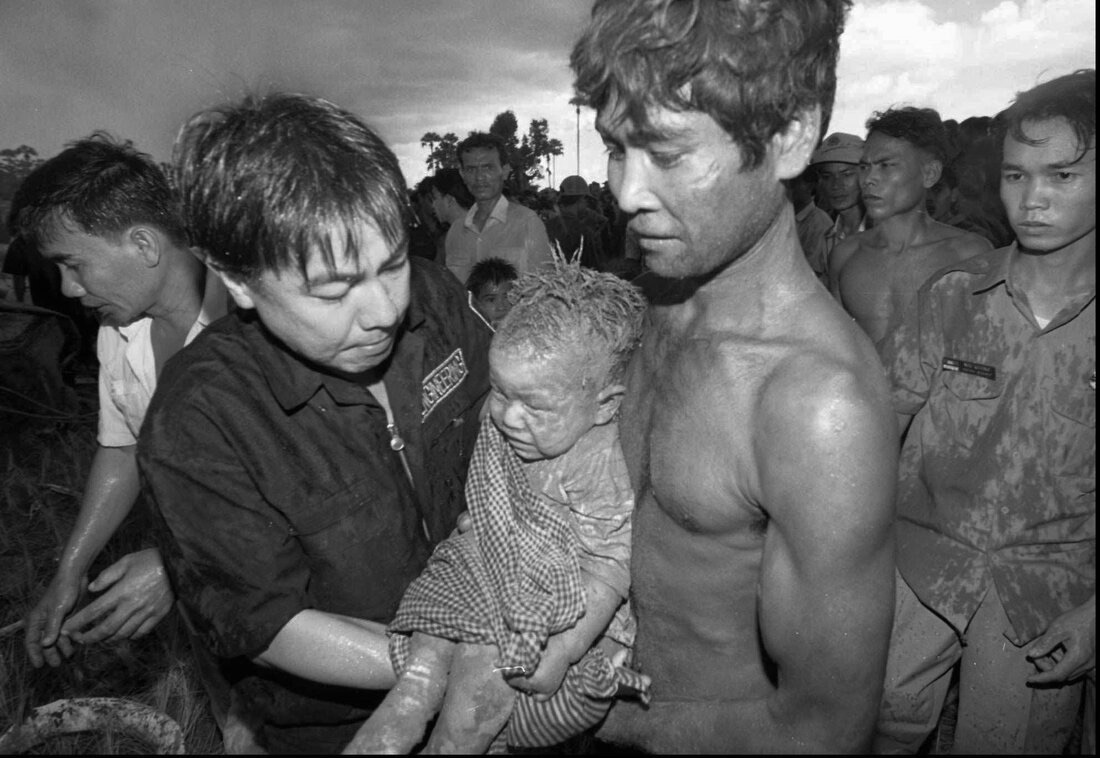 14-month-old Chanayuth Nim-anong from Thailand was the only survivor of the crash.  Associated Press/David Longstreath