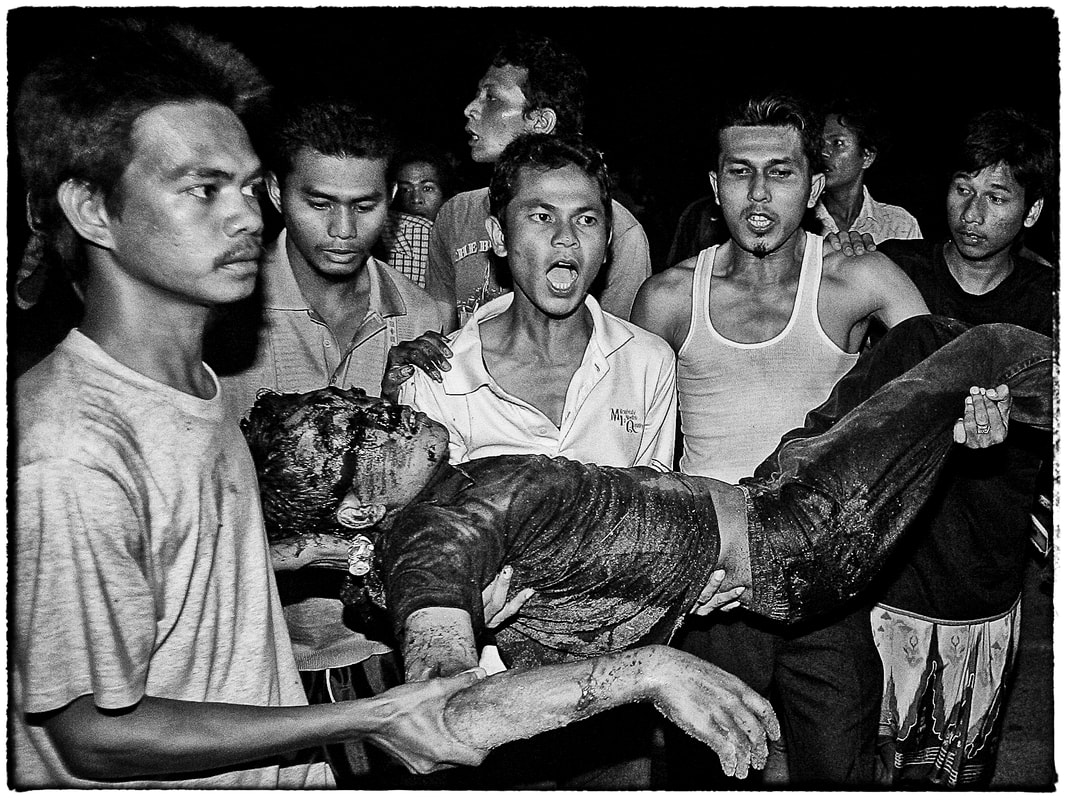 A young Muslim boy is carried after bing shot
all  photos/David Longstreath/Associated Press
The Thai teen-ager had been shot once in the head. Friends and family members were shouting as they hurried him from his hiding place in the tall grass along a busy highway on the outskirts of Pattani, Thailand.
All around me was chaos. Another boy was found dead. The youngster had hidden in a concrete tube, the type used to plant trees in the middle of the highway. He had been shot in the head as well and half of his skull was missing. Several relatives wailed in grief as others searched for fragments of the teen's brain.
Thai Muslims in the three most southern provinces of Thailand had begun a campaign in 2004 against the Thai government. Hundreds on both sides were killed. Prime Minister Thaksin Shinawatra cracked down on the region but lost power in a coup in 2006.
I had decided that the 2007 Thai New Year would be a time for trouble and I wasn't wrong. April 13th through the 16th is usually when Thais celebrate their New Year. Muslims dominated the population in the south but the government and the soldiers who patrolled the roads and highways were firmly Buddhist.
On the night of April 14, 2007, insurgents set fire to several mobile phone towers in an attempt to lure police and soldiers to the scene. An ambush awaited the unsuspecting rebels and things quickly went south for them. It seems that the Thai military knew of the trap. In the shadows, equipped with night scopes on their rifles, an elite army unit picked off the teen-agers in the tall grass. Each boy, all under 16, had been given an automatic weapon. Each was shot in the head by a sniper, killed instantly. Despite the chaos, I managed to photograph two of the boys killed. Blood streamed from their faces as they were carried out by others. It was clear that they were dead. No more than two minutes had passed when Summet, my Thai fixer, a fellow photojournalist, shouted that it was time to leave. He feared, rightly so, that the enraged Muslims might turn on me. In the background, heavily armed Thai soldiers looked on from their armored vehicle
I had covered this war on several occasions, but had never seen the deadly violence up close. The typical situation was that Thai Buddhist teachers or those in the government were ambushed and killed by insurgents on motorcycles and then their bodies set ablaze. Thai soldiers set up roadblocks and checkpoints. Buddhist Monks were forbidden to leave their temples for fear of being murdered. Muslim men were arrested and detained, and the insurgents burned some local schools in response.
Southern Thailand is mostly rural. It was a near-impossible situation to control for the military. As a photojournalist, it was challenging to photograph as well. It seemed I was always arriving late to everything.
As Summet and I were driving away from the scene that night, I was thinking ahead to the next day. In the Muslim faith, the dead are to be buried before sundown. I wanted to cover one of those funerals if I could.
Staying at the Pattani Hotel, the only secure place in the region, I met with Summet the following morning. After a light breakfast of tea and bread, we decided to return to the scene of the shootings the night before.
Enroute I asked Summet if I could cover the funeral of one of those killed.
His look shot back to me while he was driving was telling. A glimpse of panic mixed with confusion. "Why would I want to do that?" he asked.
Summet was a Buddhist. I decided he would stay in the car and wait for me while I attempted to talk my way into the village and the funeral. At the gates of the town, I approached some Muslim elders. In broken Thai, I managed to tell them I was a journalist; I wanted to photograph the dead. A relative soon arrived, and after explaining again, he nodded approval.
Intense stares followed as I trailed behind the relative. Once inside the home, I offered condolences. The father provided a “thank you” and then pointed to an incredible scene. His dead son laid across the laps of three seated family members. Cleaning and preparing the body for burial, the three young men could only look on stunned and grief-stricken. Half of the young dead boy's skull was missing. I motioned to the father, held up my camera, and asked if it was allowed. He nodded towards me and his dead son, turned and sat down next to others.
The scene was uncomplicated. Light from a nearby window was streaming in. I shot for about two minutes and then excused myself. I waited downstairs.
Soon relatives appeared carrying the wrapped body. Following them out of the village and onto a major four-lane highway, not far from where he had been shot, I walked with them taking photos along the way. Traffic in both directions was held up for the funeral procession; relatives and other young men took turns carrying the funeral stretcher. When the procession arrived at the graveyard, entry was barred. I could take photographs I was told, but not from inside. Standing outside next to a crumbling concrete block wall, I watched as the men of the town buried the boy. The mother and other women were out as well.
I did not linger long. I photographed what I thought was necessary to tell the story and then decided to leave. Walking back to Summet and the car, a male voice in English said, "It is time for you to leave."" 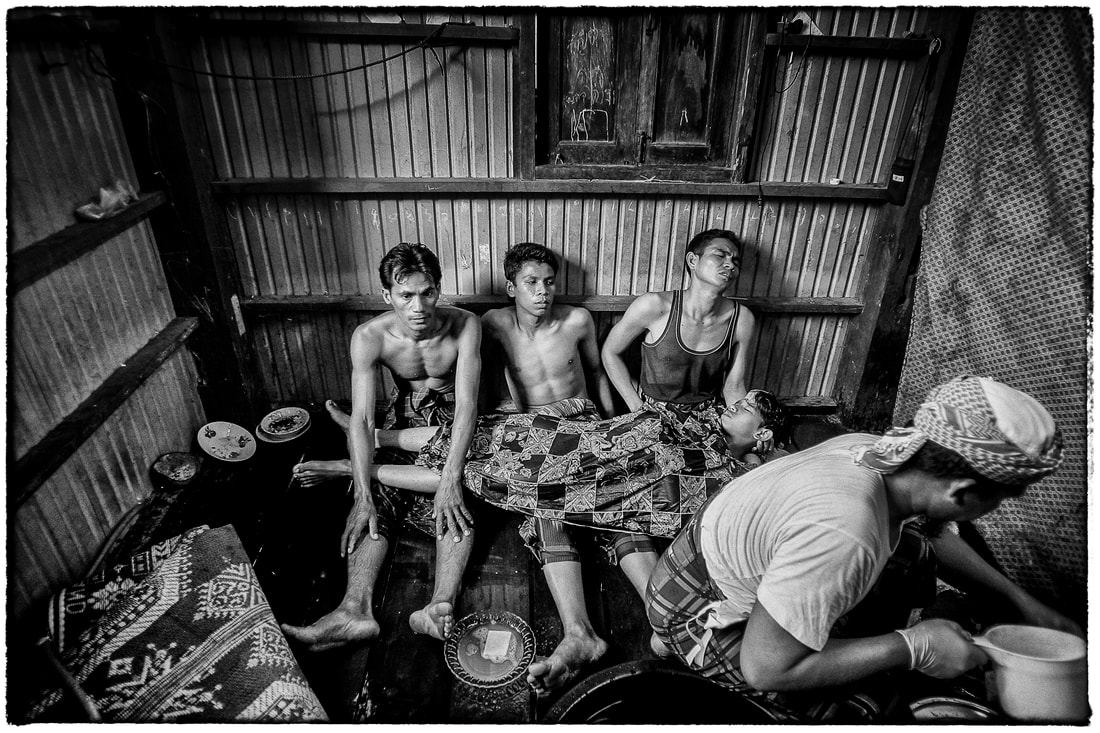 A young Muslim boy is prepare for burial by friends and family. 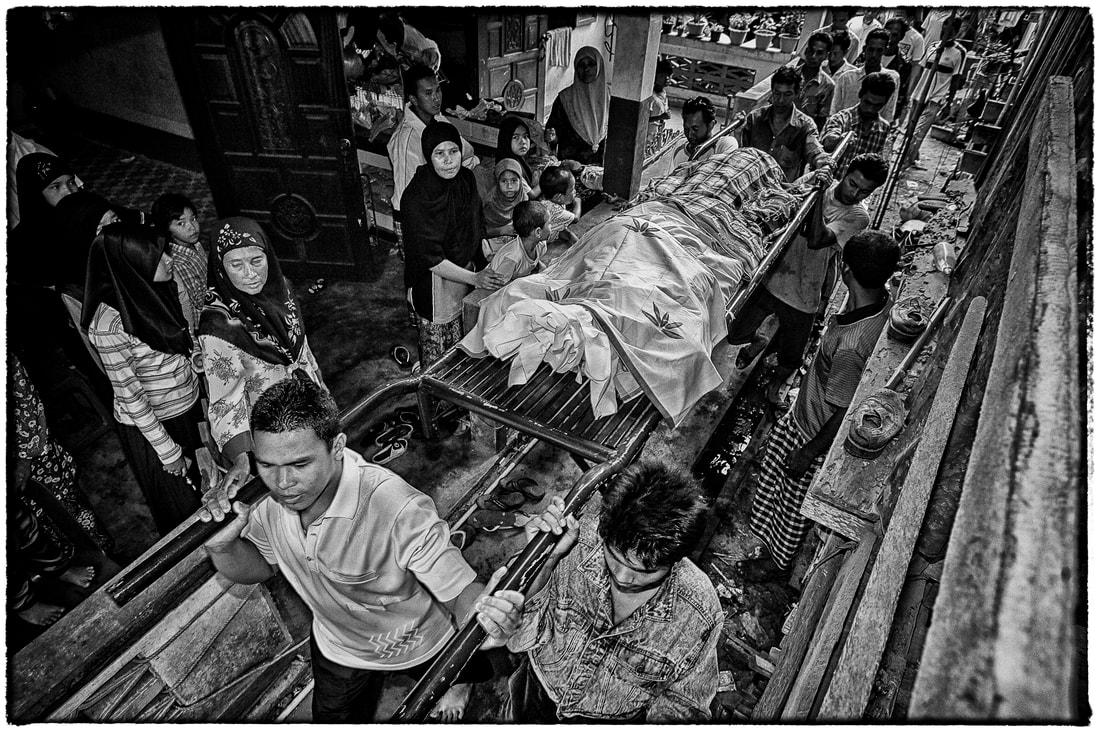 The body of a Muslim boy is carried by friends and family through his village. 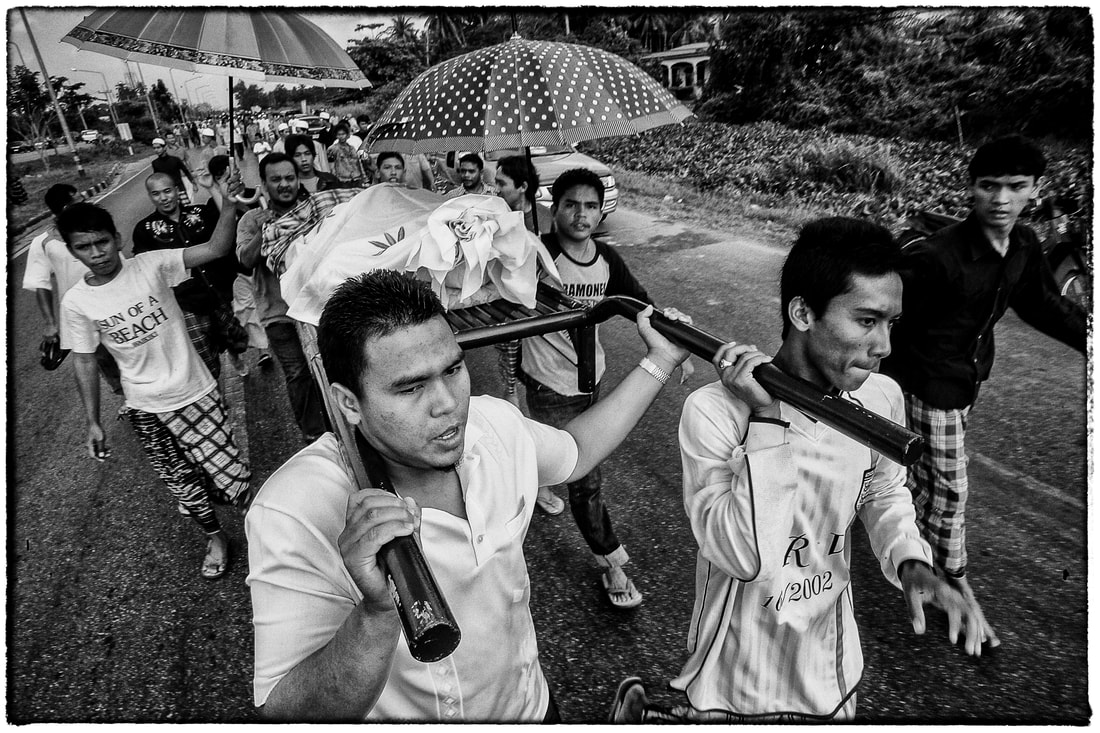 A young Muslim boy is carried to the cemetery by friends and family. 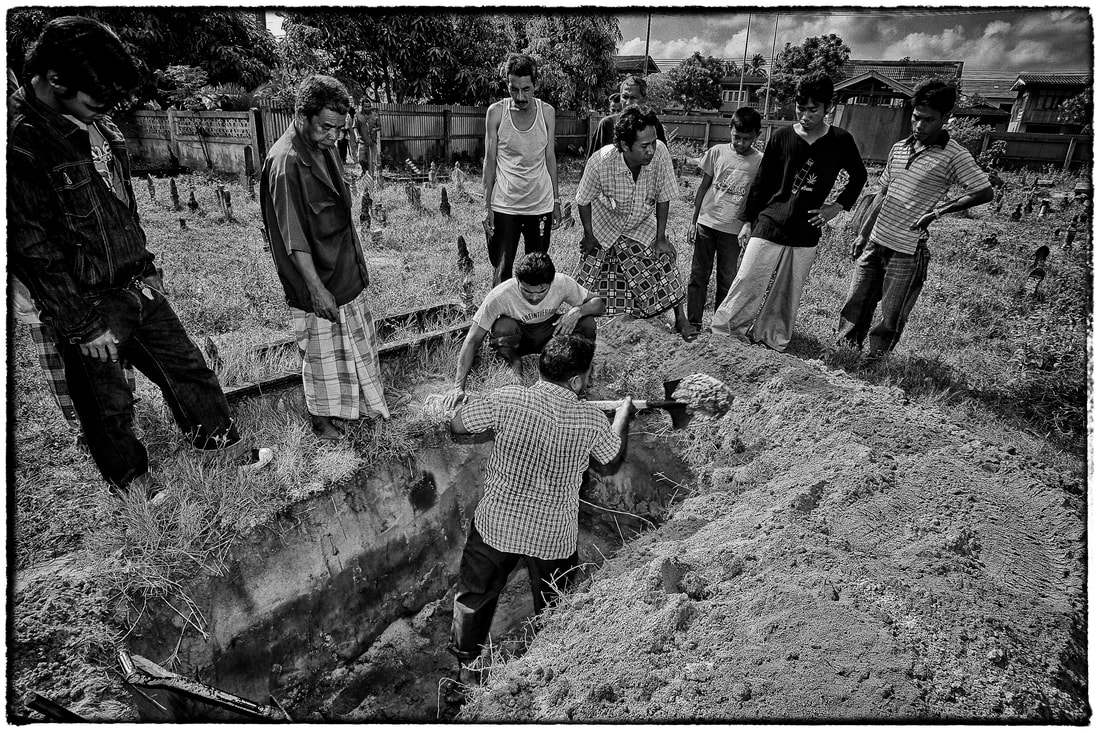 Friends and family of a shooting gather to dig his grave. 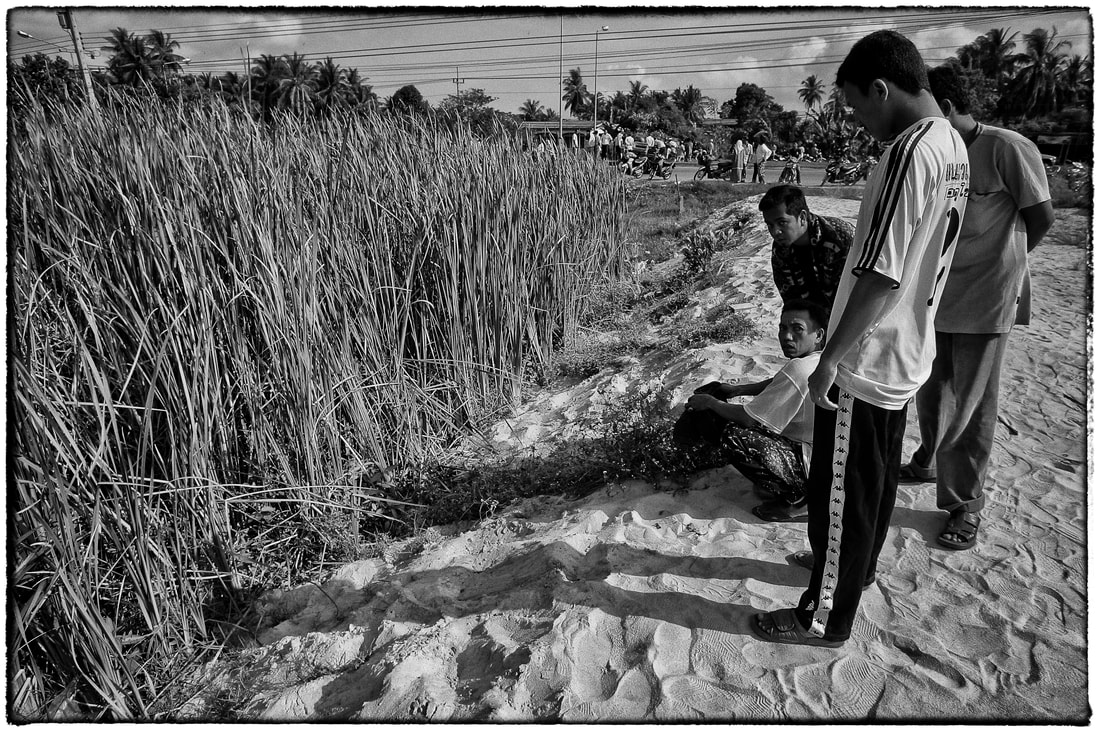 Friends and family of a young shooting victim gather at the site where his body was discovered.
see the book at:  https://www.blurb.com/b/67930-one-week