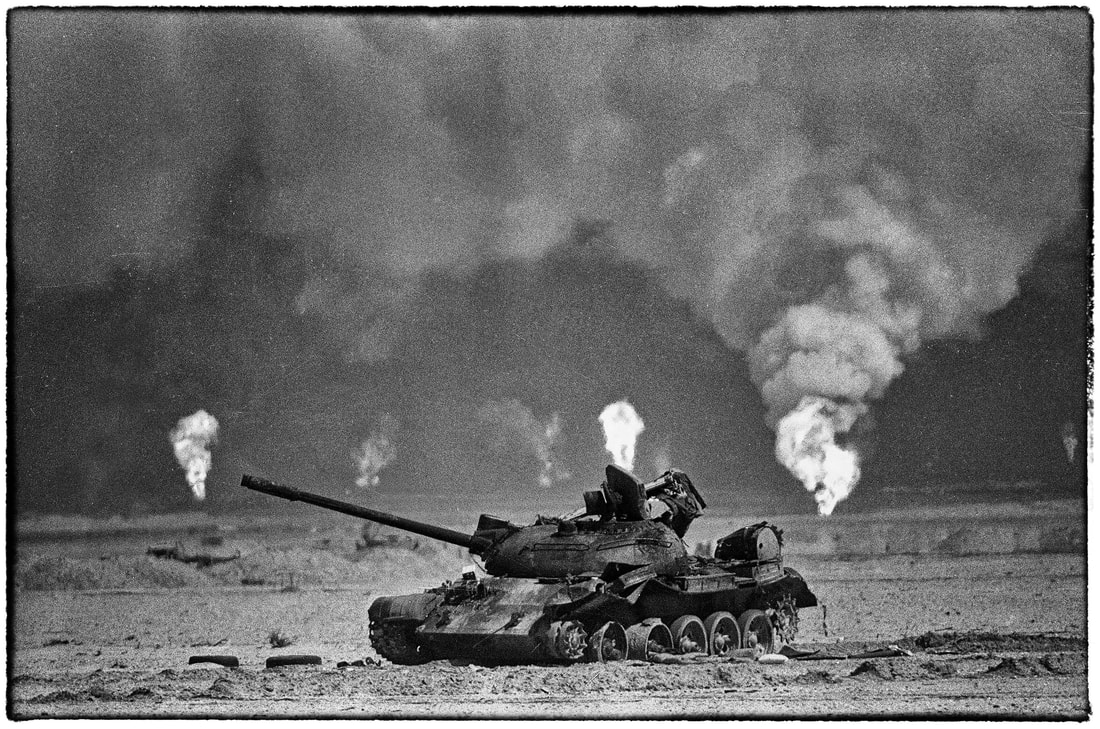 A destroyed Iraqi tank is surrounded by burning oil wells near Kuwait City.
​The first Gulf War was both a blessing and a curse for me as a wire service photographer.  I felt certain my eight years in the US Navy, as a photojournalist, would put me ahead of others for consideration when it came to duty in US Navy Photographic POOLS.

On the other hand, it took me out of a backwater Associated Press bureau and place me squarely at the tip of the story.   Things would never be the same for me as the AP Photographer assigned to Oklahoma.

I first learned of the beginning of the Gulf War, the invasion of Kuwait by Iraqi as I stood in the hotel room of fellow AP photographer Jack Smith.  We were working at the Goodwill Games in Seattle.
CNN was showing tanks in the desert and the distinctive water tower in Kuwait City with Iraqi soldiers running about and shooting.

"We are going to WAR", Jack announced.  I had no idea where Kuwait was and did not much care.   Jack, whose nickname was "chainsaw" was more informed on events in the middle east.

I had extensive travel experience from my enlistment in the US Navy in places like East and West Africa, South America, and the Mediterranean but, had never served in the Persian Gulf.

Jack went on to tell me that Iraqi's invasion of its tiny oil-rich neighbor would spark a military response from the United States.  Jack added that Saudi Arabia and the Bergan oil fields might be next on Saddam's list of targets.

It seemed certain that President George Bush would send an aircraft carrier  to the Persian Gulf.  I had spent half my naval career photographing flight operations on America's flattops.

After the games I went back to Oklahoma.  A phone call to the deputy of AP Photos where I discussed my experience.  George Mikulic who took great delight in telling anyone who would listen, “He’s full blood Cherokee” spoke of the possibility of sending me to Dubai.  At this stage no one knew what would happen next and George felt it would be good to have someone in the area just in case.

In a couple of days, I was in Dubai, jet-lagged and not really understanding what would come next.  Myself, AP journalist Richard Pyle, the last bureau chief of Saigon and a radio reporter, Karen Sloan lounged for days in a four-star hotel before being moved to less luxurious rooms.   It took about a month of maneuvering before the Saudi visas came in.  When they did it was a mad dash for the airport and a flight to Dharan, Saudia Arabia.  We just all felt that it would be over with before we could get there.

It wasn't long before a gang of shooters assembled in the Sand Cafe at the Dharan International Hotel.  Don Mell, Scott Applewhite, Tannen Maury and myself formed the team with a Turk,  Burhan Ozbilici, who arrived shortly after we did.  I was soon spending long hours in a US Navy mail plane, known as a "COD" shuttling back and forth between Dharan International airport and the deck of the USS Independence which was stationed in the Persian Gulf.

Having watched the press run wild in Vietnam the public affairs community of the US Armed Forces was determined to manage this war.  We soon found ourselves attached to Saudi minders.  We were not allowed to just wander off.  If you wanted to cover an event, such as US troops landing at Dharan, you had to put your name, affiliation and country you were reporting from on a signup sheet.   Soon desert camouflage press credential were issued, I still have mine, tucked away in my memory locker.

From a deluxe suite at the Dharan International a US Navy Captain nicknamed Hollywood Mike for his work with the film industry as an advisor, called the shots early on.  Hollywood could have easily starred in any war movie, a dashing Navy Captain with an easy does it attitude.

Herded onto buses, passes checked again and again journalist were soon transported to such exotic locations as the Dharan Internation Airport flight line where we photographed US forces deplaning from 747's.  All very young men, shaved heads and starched utilities.  After the second time shooting this cluster fuck I was determined to move on.

I formulated a plan.  It was a simple plan, I just got up early and left.  The car and drivers at the hotel were not about to say no to an American so off I went.  I wandered for hours in the desert, photographing camels and herdsmen and just about anything else.  In 1991 Saudia Arabia was a closed nation.  Showing the folks back home anything other than soldiers getting off airplanes was s sure bet.

While the Saudis did not seem to mind my wanderings the US Public Affairs command did.  On several occasion, I was mustered into Hollywood Mike's office to be told that I should be concerned with operational secrecy.  After all the Iraqi’s were reading US newspapers on a daily basis.  What a load of crap that was.

The first month I was the official “POOL” photographer for the daily run to the USS Independence.  The flight deck of any US carrier is a dangerous place but it provides opportunities for good images.  That in a nutshell is all I cared about, making good images.

Soon other agency photographers were shouting to Hollywood Mike their desire to be the “Pool” shooter. Landing and taking off from the deck of the USS Independence was an adrenaline rush.  Being shot off a steam catapult was always stressful.  Landing on the carrier was equally stressful. After a month of being scared witless almost daily I was more than willing to give it up.  Soon I was looking at the sign up sheets for photo opportunities.

Time seemed to stand still but things were moving.  One of my last POOL assignments before going back to the United States was a photo op in the desert with comedian Steve Martin.  Everyone was getting into the act.  One thing though that struck me on that assignment was the massive amount of tanks and other arormed vehicles assembled in the desert I saw while helicoptering out to the event.

Then I went home.  A glass of champaign and a business class ticket to London, then Chicago then back to Oklahoma City.  Everyone was curious, they acted like I was a returning soldier.  The airlines even bumped me to first class.  I slept the entire way back.

Fast forward four months.  I have been assigned to cover the Super Bowl in Tampa.  On an early morning jog, I failed to see a chain barrier, fell and fractured my elbow.  I spent the Superbowl in the AP’s trailer doing my best to help out.

A month later my arm barley out of a cast, Vin Alibiso asked if I was well enough to return.  The air war had been going on for six weeks and the push into Kuwait was coming soon.

When Vin called and asked if I was interested in going back, I did not hesitate.  In less than a day I was packed and on my way to New York where I met AP Photo editor Brian Horton and several others. We were soon packed into a Saudi airlines 747 for the long flight to Jeddah.  Dharan was closed.  We would have to rent cars and drive the length of the country.

But then plans changed.  Somehow we had gotten a military flight, A Saudi C130 cargo plane.  In a couple hours he landed and were met by Don Mell.

Standing at the back of the C130 as the cargo ramp lower Mell was dressed in fatigues.   “Welcome back Bud” a nickname they had given me earlier on.

The situation was changing rapidly.  All the US Military pools had been filled but Mell had a plan.  During the first tour I watched on a regular basis as Mell would spend hours drinking tea and hanging out with our Saudi hosts.  Often I would be asked to buy as many hats and t-shirts from the USS Independence as I could.  Mell who was a master at fixing things would hand out the gifts while drinking tea.  The flight from Jeddah to Dharan on a Saudi cargo plane was arranged by Mell.  So was the photo pool I was about to leave on.

The notion of driving from the Saudi border to Kuwait City during a war never crossed my mind but that is what happened next, in of all things an airport shuttle van.

The Saudi’s were not about to be outdone by the Americans when it came to photo pools.  The trip was like a scene from a movie.  Straight up highway one we passed dozens of destroyed Iraqi tanks and armored personnel carriers.  Smoke from the burning oil wells filled the air.  We stopped often to let US warplanes strike a position.  Then we would move on.

Once we arrived in Kuwait City the Saudi minders were eager to get back.  I had made it to Kuwait City and I was not about to return to Dharan.  I packed all my exposed, undeveloped film into a caption bag, handed it to a AP reporter and walked away.  First stop was the burned out Sheradon Hotel.  The hotel manager handed me a hot 7-Up, thanked me for liberating his country and hailed a car and driver for me.  The next six weeks would become a blur of images and experiences. 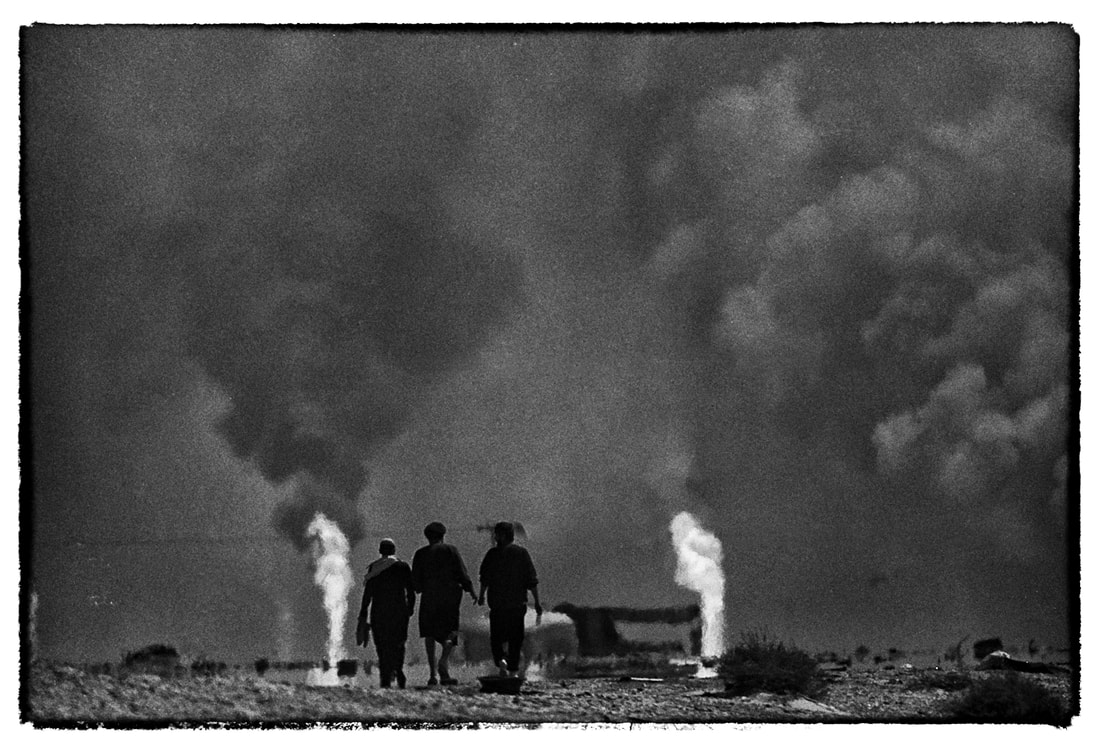 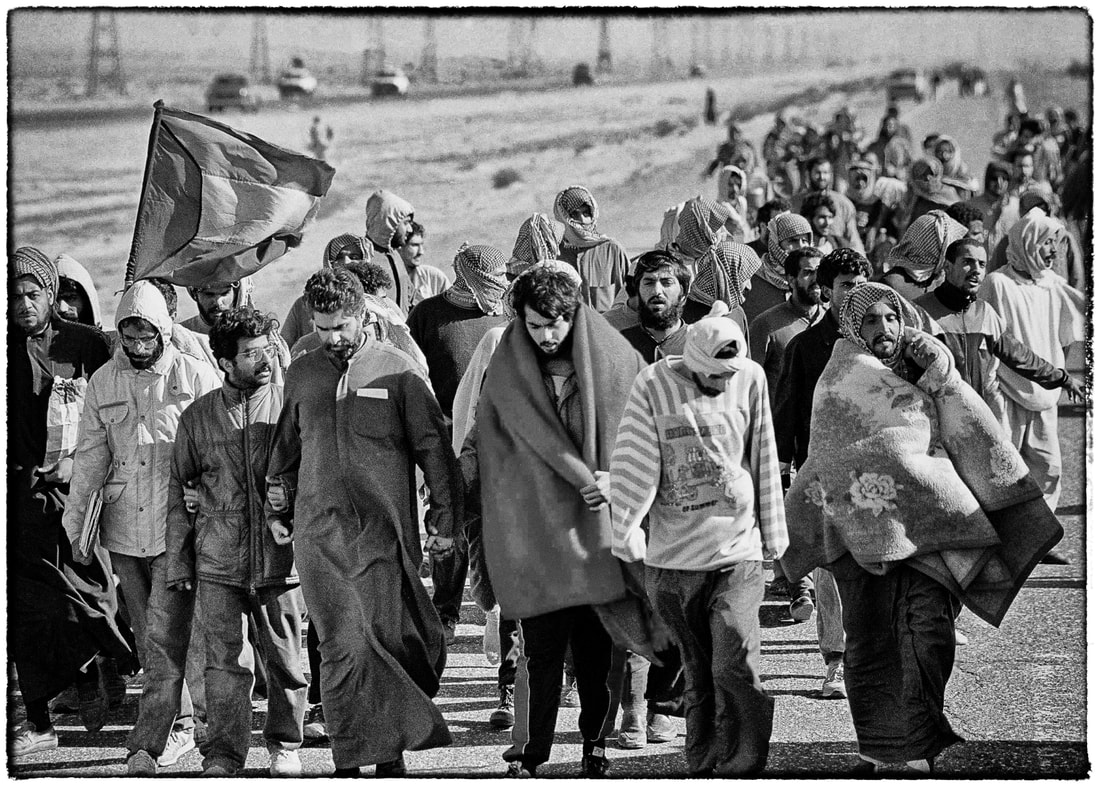 Kuwait prisoners of war walk home through the desert towards Kuwait City at the end of the first Gulf War. 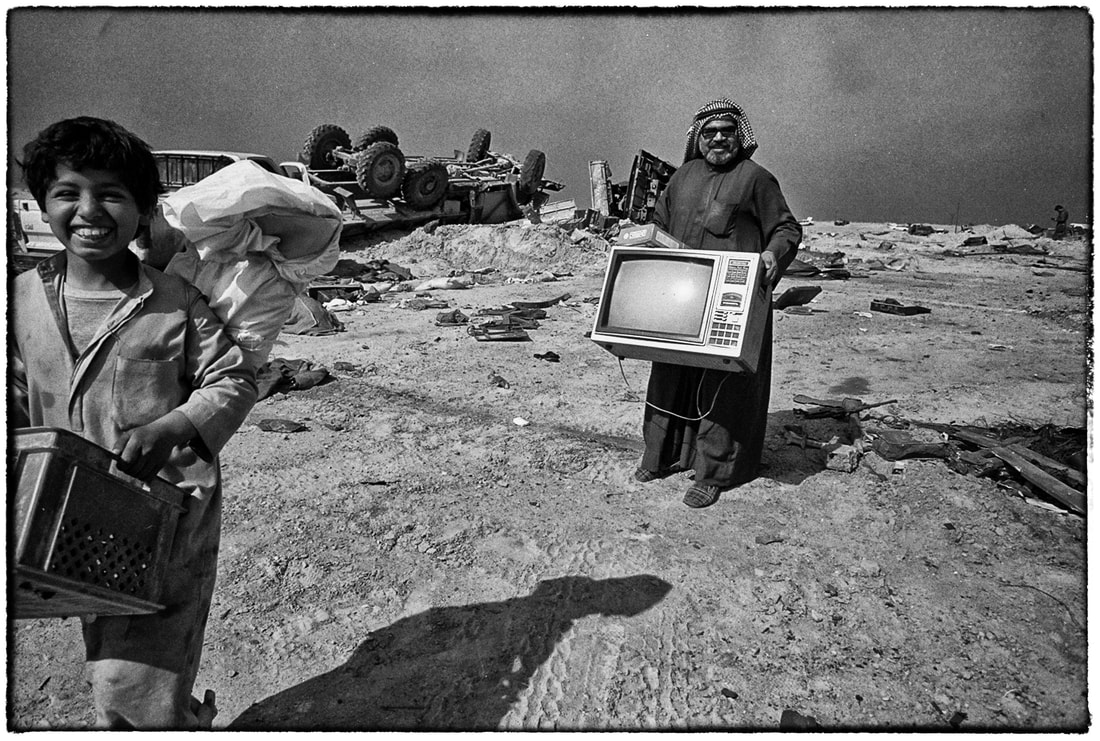 Kuwaiti men and boys scavenge through debris taken and abandoned by the Iraqi Army at the end of the Gulf War. 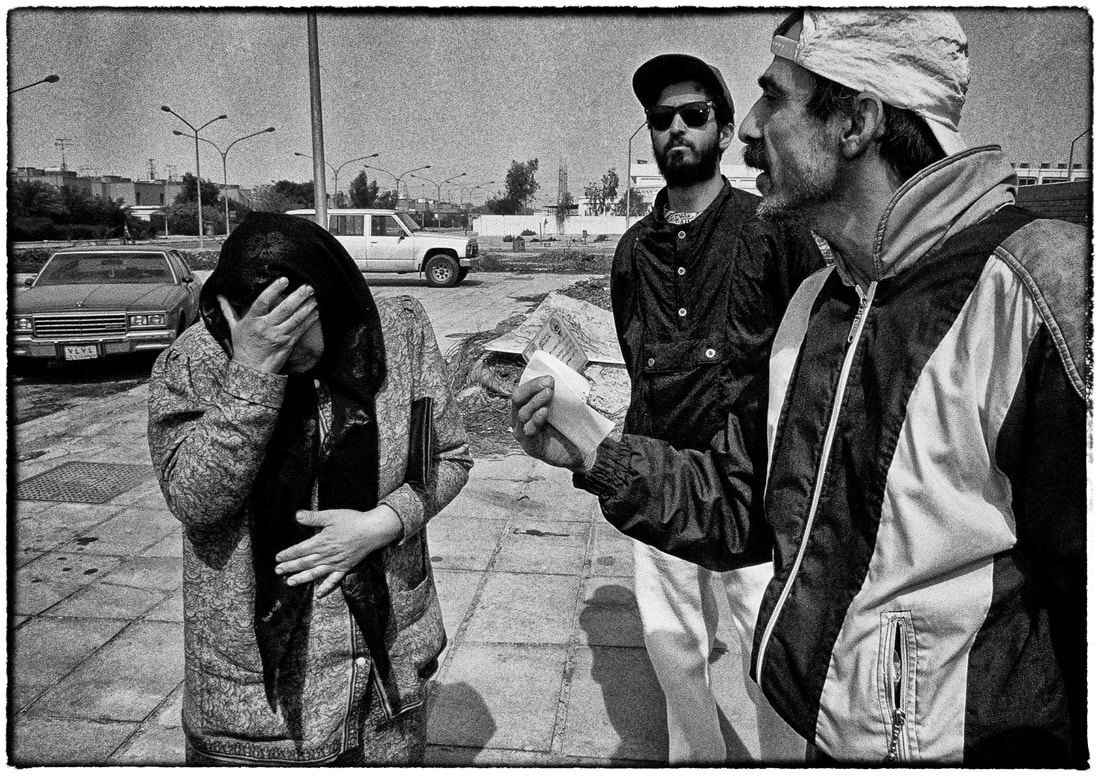 A woman learns of the death of her husband in Kuwait City. 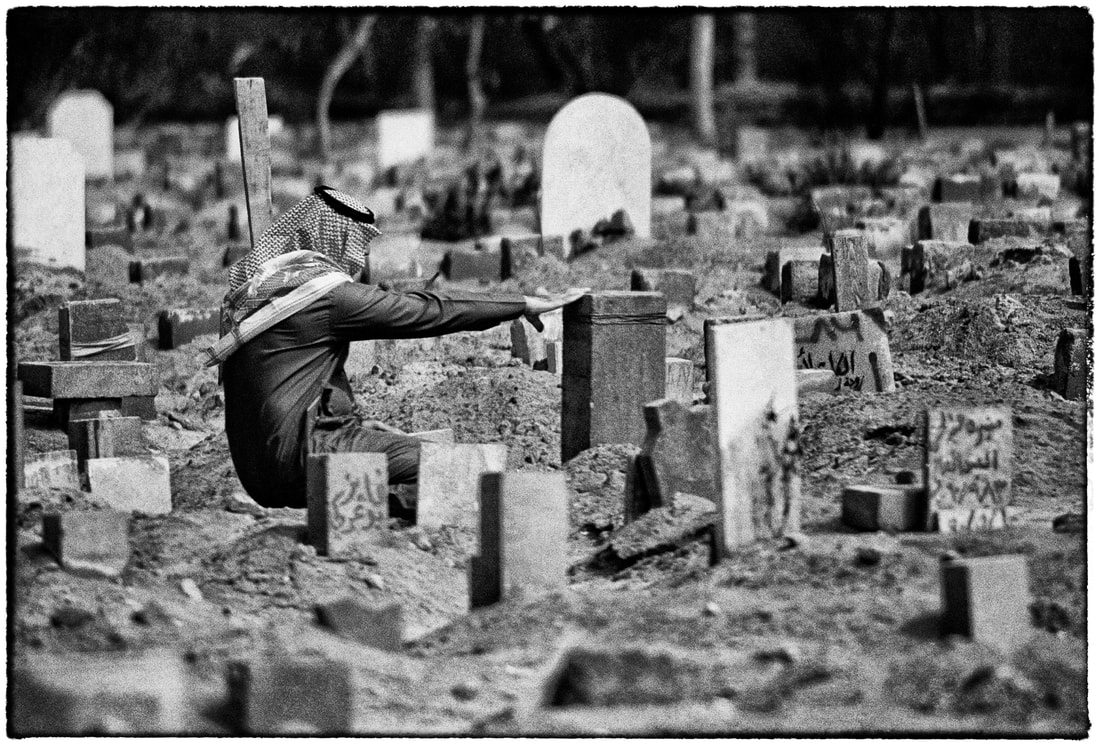 A Kuwaiti man visits a grave at the end of the Gulf War.