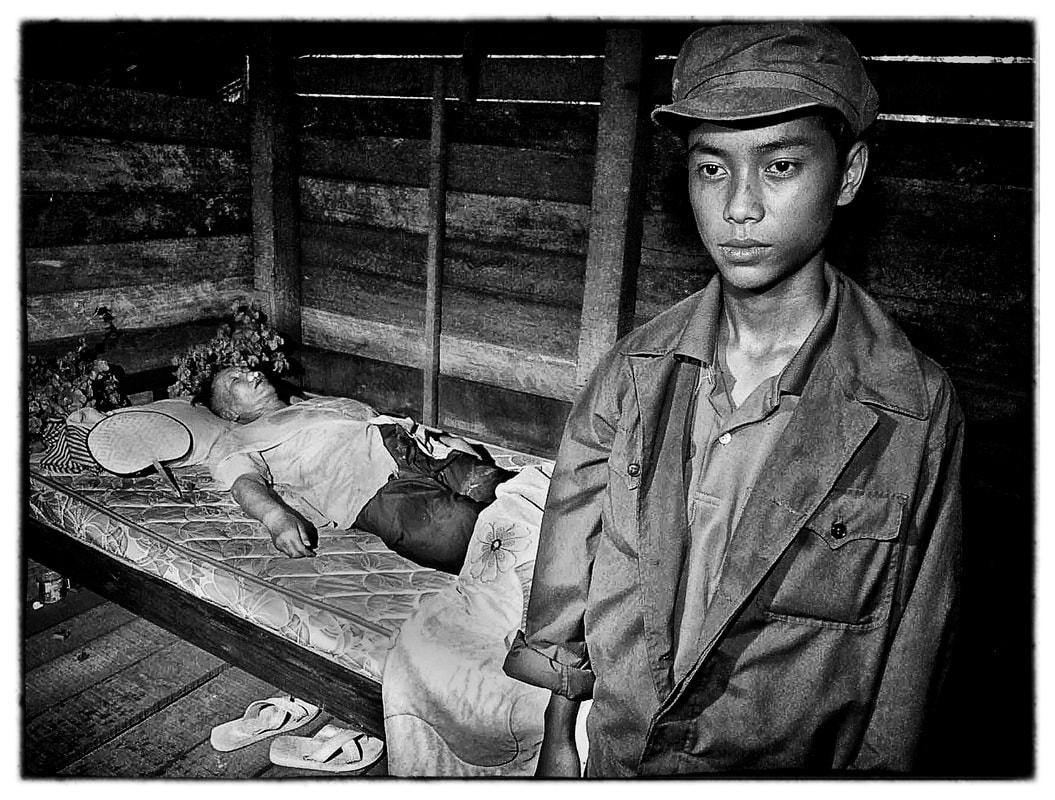 A Young Khmer Rouge soldier watches over the body of Pol Pot
On my desk in northern Thailand,  sits a tiny black urn.  Inside are tiny skull fragments from Pol Pot's cremation site.

“Pol Pot” who the heck is that"  I hear just about anyone under 50 asking?
A quick history lesson shows that Saloth Sar, aka Pol Pot, was the leader of the communist Khmer Rouge back in the mid-’70s.  He along with his top soldiers,  is credited by historians with the slaughter of about 1.5 million Cambodians.
When Cambodia, a tiny nation in southeast Asia, fell to the communist Khmer Rouge in April of 1975, the plan by Pot and his generals were to empty the cities and form a utopia of classless workers.   All would share in the work of rebuilding Cambodia which had been ravaged by war and civil war since the mid-'60s.

The problem as is often seen with guerrilla fighters is that they are good at overthrowing governments but not so good when it comes to running a nation.   The situation soon collapsed as forced labor failed to grow enough food to feed the now starving population.

Making matters worse, Pol Pot was on a mission to reclaim Cambodian land he felt the Vietnamese had stolen.  After three years of raids on Vietnamese border villages, Vietnam had had enough.  On Christmas 1978 they invaded.  Pol Pot and his soldiers fled west to the jungles and sparsely populated Thai-Cambodia border.  They set up in Anglong Veng and Pailin.
Once the Vietnamese had control of Phnom Penh and most of the rest of the country, the stories began to pour in of mass killings, torture, and plain ineptitude.

Mass graves were being dug up it seemed everywhere.  Nuon Chea, Brother No 2, personally signed the death warrant on over 14,000 who were then executed at a place called Touel Sleng in Phnom Penh.  Look for more on him in a coming post.
Pol Pot, Ta Mok and what remained of this army were busy building themselves homes on an escarpment that looked east outside the town of Anglong Veng.

On most days you can see 20 miles.  Fighting off the Vietnamese and eventually, the Royal Cambodian Army seemed simple.  Mine the roads and the fields, which they did.  Rain artillery and tank fire down of them when they got to close. (note: Cambodia remains one of the most heavily mined places in the world.)

Eventually, the Khmer Rouge and its leader dropped off the world's radar screen.  The Vietnam war ended and the world soon found itself chasing other demons.  It seemed no one other than journalist Nate Thayer had an interest where Pol Pot was.   The Vietnamese stayed for ten years.  When they left civil war broke out in Cambodia.
On April 16 of 1998, myself and three other journalists were packed into a mud-caked Range Rover and driven across the Thai-Cambodian border for a short distance.  We were there to photograph Pol Pot's body who had reportedly died the day before.
As we got out a Khmer Rouge soldier, carrying an AK 47 and dressed in the familiar olive drab khaki uniforms lead us down a path through an open field.  We were warned several times not to get off the trail.  Landmines were everywhere.   In the distance, you could hear gunfire.

Pol Pot, his health and whereabouts, had been a top news story for years.

When I first entered the bamboo hut where his body was being kept nothing seemed right about the scene.  The hut looked big enough for one person and there were no personal belongings in it.  A Khmer woman in her 50's and a young girl were standing nearby.  I was told by the Khmer Rouge representative that she was his wife and daughter.  But this was Pol Pot.  The number one genocidal manic left in the world.  Shouldn't he have a big house and fancy automobiles?
And there he was, a dead old man with poorly dyed hair and cotton balls stuffed in this nose.  His clothes were stained as was the mattress he was lying on.  He looked like a homeless person with a bad haircut.
Things outside were moving fast. That gunfire seemed to be getting closer and the KR soldiers were telling us to make it snappy.  I went to work photographing Pol Pot first and then a young KR boy with his body.  I was struck by the fact that none of them seemed sad.

I was one of the first journalists in Southeast Asia to carry and use digital cameras. They were an invention of the Associated Press, the NC 2000,  and I was on of the first of 15 AP photographers to be issued the cameras.  Essentially the AP had married a Nikon N90 body on a card reader.  The file size was 1.7 megs.  The frames per second, were one.  It took a laptop computer to process the images and no one seemed to like or want to use the NC2000 camera.

My colleagues from the other wire service agencies in Southeast Asia loved heaping abuse on me and my admittedly poorer than film quality images.  By today's standards, most mobile phones have ten times the image capturing power as did the NC2000.
But on this day wire photography changed forever in the jungles of Southeast Asia and beyond.  I shot as fast as I could, there were the usual technical problems with NC 2000, not enough light, poor battery storage but I was committed to the camera.  It was the camera I used to photograph the Oklahoma City bombing and later convicted bomber Timothy McVeigh leaving the Perry, Oklahoma jail.  I had learned to work with and around certain issues.

Moments later I was back across the border and things were a blur.  I did not have time to speak to anyone about what I had seen.  It seemed like journalist from everywhere were chasing me shouting question as to what I had seen.  Unlike today, I had NO idea of what my photographs looked like.  Using flash with the camera was dodgy.  A million doubts raced through my mind but time was pressing down on me and I had to get somewhere to transmit the photos.

We drove out of the border and took the main highway to Surin, Thailand.  I was looking for a secure but secluded location to work from.  Not far up the dusty countryside, Boonrap, the AP driver,  spotted an abandoned gas station.  He pulled around back out of view.  I fired up the laptop and the portable sat dish.  It took a couple minutes for all of it to power up.  I found the necessary direction for the sat dish and began working the images. I worked the NC2000 files into wire service photos complete with caption then sent them off one at a time to the Tokyo, Japan AP photo hub.

The wire service is all about speed.  The first image out on the wire is usually the first image cropped and fit into the page.  I was hours ahead of any competition.

The Thai border guards had shut the crossing down so I knew what I had, was going to be it.  No going back.
Later that evening while still transmitting from a Surin, Thailand hotel room I was asked by an AP radio reporter if it was really him.  Nate Thayer a year earlier had covered a show trial of Pol Pot by the leadership of the Khmer Rouge.  He was stripped of power but allowed to live.  Being the Southeast Asia photo editor I had attempted to purchase Nate's images.  I remember clearly what Pol Pot looked like.

"Why would the Thai military sponsor the trip across the border if it was not him", I asked.  Could I be 100 per cent certain? The only thing I could be certain of was that in that hut was a dead old man who looked like the world's last despot.

In the following days, confirmation came from many sources.  Lou Boccardi, the President and CEO of the Associated Press back in 1998 and Vin Alibso, the Vice President for Photography I am told were thrilled with the coverage.
The playcheck, newspapers around the world that had used my images, showed a 64-1 score.  The next day I was told Reuters and AFP in Bangkok ordered digital cameras.

The digital revolution had come to Southeast Asia. 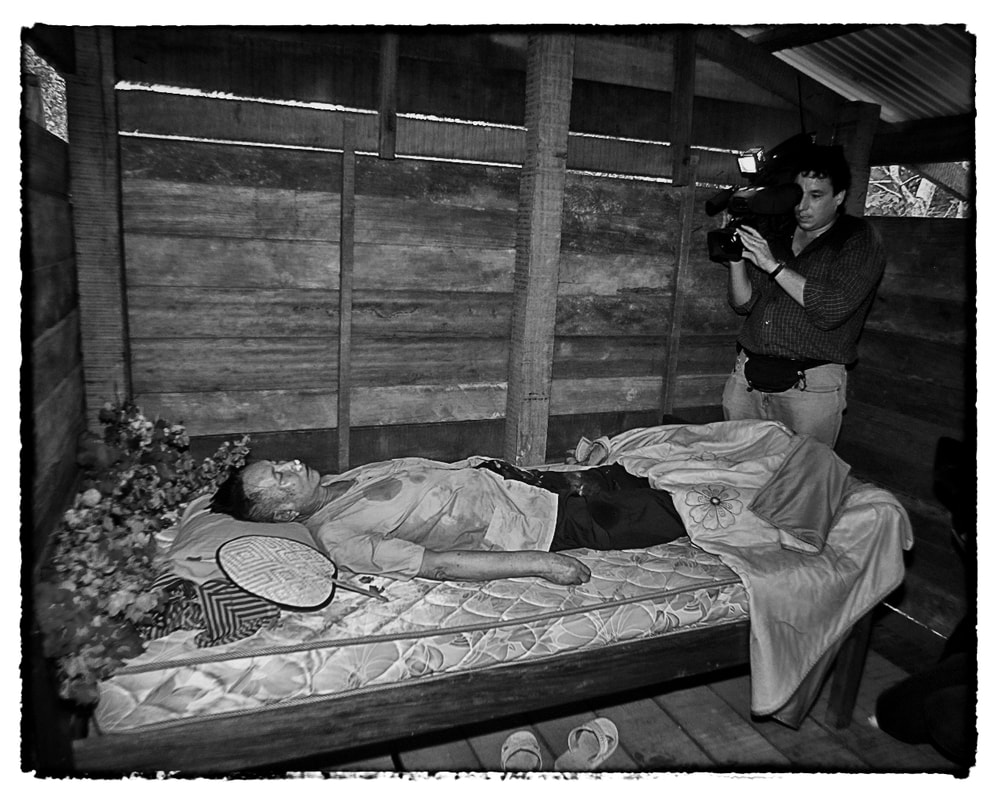 The body of Pol Pot is filmed at border jungle hut.
​ 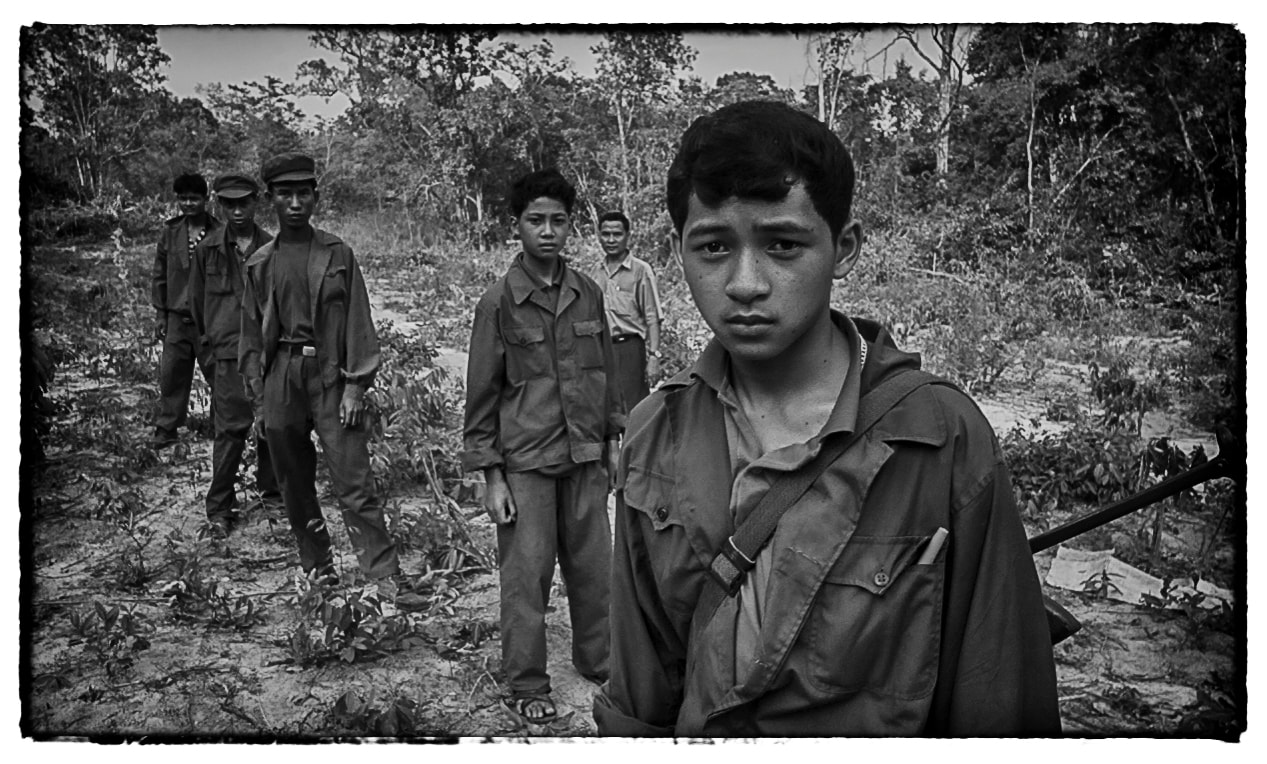 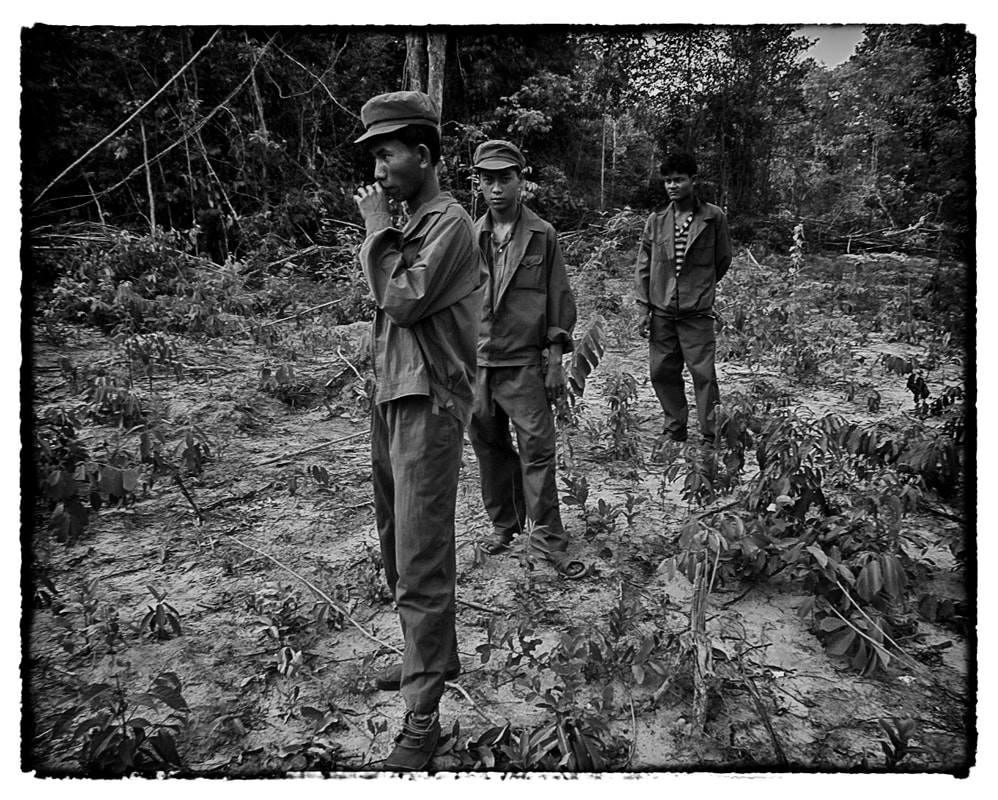