The 2004 Asian tsunami killed at least 228,000 people. Ten thousand died in Thailand alone. Many of those were family vacationers from such places as Sweden, Norway, Finland, and Denmark. Thailand's beaches are some of the most beautiful and famous in the world. That December 26, 2004, Indian Ocean tsunami was caused by an earthquake thought to have had the energy of 23,000 Hiroshima-level atomic bombs. It struck the beaches of Thailand in the afternoon. There was NO warning.

The first inkling of trouble came in a phone call from a co-worker, Apichart Weerawong. "David something terrible has happened in Phuket," he said. My immediate thought was an air crash at Phuket Airport. "No," he said, "a flood."

Christmas in Thailand for me was never a holiday I celebrated, but this year I was at my house in northern Thailand with my adult daughter, Nicole and her friend from California. They were booked for a few days near Phuket and were suppose to be leaving the following day. We had spent several days relaxing, eating Thai food, and just hanging out. Northern Thailand at that time of year is in its dry season, but the situation changed rapidly.

When a spot news story like the tsunami is breaking all you can think about is "how fast can I get there?"

Phone calls now started coming in from around the world. Family members were checking on my condition and safety as well as that of my daughter and her friend. Phuket was 950 miles south of my jungle home but most of the callers only knew that the tsunami happened in Thailand as well as Indonesia and other southeast Asia nations with west-facing seacoasts.

My bags and cameras always travel with me, even when I am on holiday with my family. It became a scramble to get to Phuket. After a quick flight and deplaning, I walked past hundreds of tourists all looking scared and stunned. As I got to the baggage claim area, it was even more crowded. Many were talking to friends, some camped out on their luggage, some arguing with police and airline officials, and many just sitting with their heads in their hands. There were plenty of "walking wounded" as well. Tourists with bandaged heads, broken arms and stranded in wheelchairs. What you did not see were smiling faces.

Telephone communications, including mobile phones, barely worked.  My Bangkok office had told me that the worst of the tsunami occurred north of Phuket in a resort area called "Khao Lak."

When I first arrived at the Phuket airport, I managed to convince a taxi driver going off duty to take me into town. Phuket was 20 miles from the nearest beach. I had worked there during the annual Vegetarian Festival and knew the area well. The drive from the airport was the beginning of an on-going friendship. Sumantree was an older Thai man with a shy smile, a warm personality and a streak of honesty not usually found in taxi drivers. He was well aware of what had happened. He was also well that his fee for the next couple of weeks could easily double or triple. I liked him instantly.

Once at the hotel, I told Sumantree that I would pay him $100 a day and guarantee at least three weeks of work. His handshake and shy smile sealed the deal. In four hours we left for Khao Lak. His relationships were one of the main reasons I was able to get a lot of the early coverage that I filed. Sumantree would pause at convenience stores along the way to chat for a few minutes with the clerks and always emerged with a good idea of where the photos were.

On the morning of ‪December 28‬, Sumantree drove me north from Phuket about 60 miles towards Khao Lak. We arrived at a police roadblock and were stopped. Seems there would be no entry to the area. While sitting there trying to figure out a plan, the police said it was (was not) ? ok to enter the Khao Lak area. It seems that a very important relative of the Royal Family was dead in Khao Lak and that until his body was found, no one was going in, not even rescue workers. Dawn was beginning to break, and it was then that the devastation became apparent. Thai Highway #4 leads up the coast from Phuket and ascends to a heavily forested bluff overlooking the beaches. It was from here that I could see the vast destruction in the dim sun. There were no lights on, nothing was moving.

When I hear someone describe tornado damage or other storm destruction as looking like a war zone or that of a bomb having gone off, I often find myself saying things like "shit, you have no idea what a war zone looks like."

Khao Lak that morning looked like a war zone. The dead were piled up in two's and three's in every direction. Sticks, plastic shoes, and coconuts were piled 10 feet high in many areas, complete with arms and legs sticking out. After just one day in the tropical sun and the bodies were turning black and unrecognizable. The stench was overwhelming.

It was at this point that a pack of Marlboro Reds came in handy. One cigarette was to smoke, to calm my nerves. Two more were to pull the filters off and poke up my nose in an attempt to kill the stench. If you found a tub of Tiger Balm at the 7-11 you could also rub the ointment inside your nostrils to try and kill the odor, but nothing ever really worked.

During the first three weeks that I worked the story, I came back to the hotel each night and stripped down to my underwear in the hallway, placing all my clothes inside a large black trash bag. The maids would come around while I was showering to get the laundry. My shoes were left outside for a while, but soon the other guests were complaining about the smell. I had to start wearing rubber boots. Sumantree would not let me wear them in his taxi though, and I had to continually fish them out of a plastic bag in the trunk and slip them on before going to shoot.

In my world as a photojournalist after covering the first Gulf War and the Oklahoma City bombing, I figured I had just about seen it all. Photographing those events had handcuffed me with Post Traumatic Stress Disorder, and before leaving for Thailand in 1996, I spent considerable time with a psychiatrist. He helped me to get through what I had experienced while covering the Oklahoma City bombing. The Asian Tsunami of 2004 and the images that were burned into my brain while covering that story still visit me on occasion for a full technicolor nightmare. 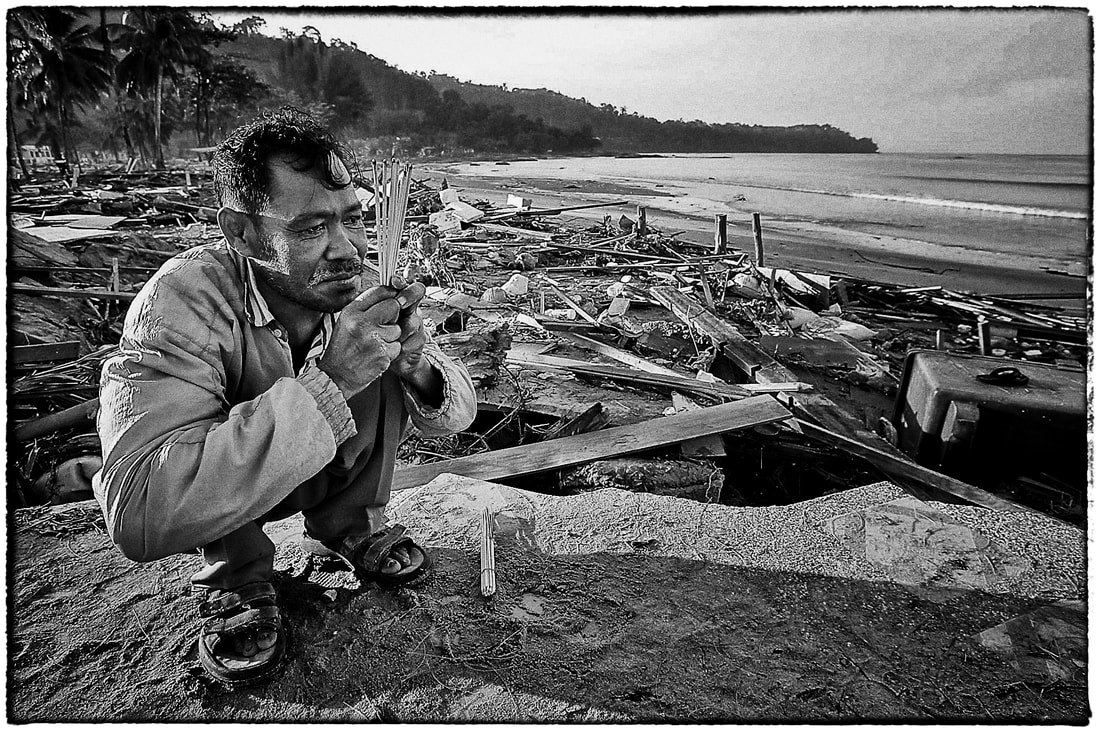 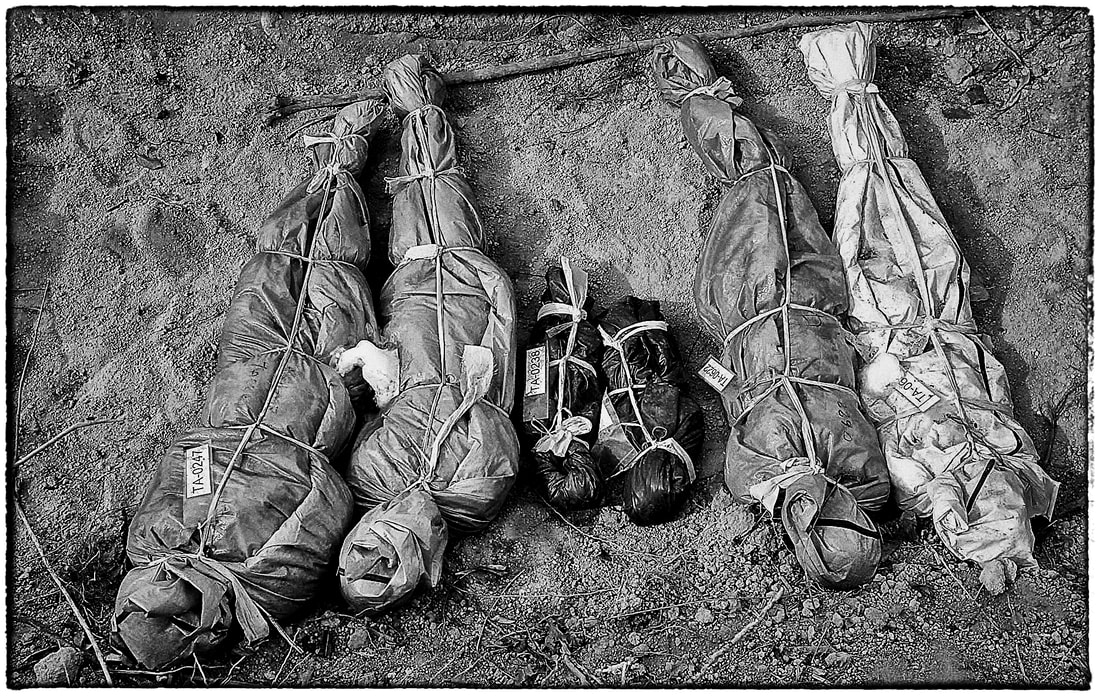 The bodies of unidentified victims of the 2004 Asian tsunami wait for burial in a mass grave near Khao Lak, Thailand. AP Photo/David Longstreath 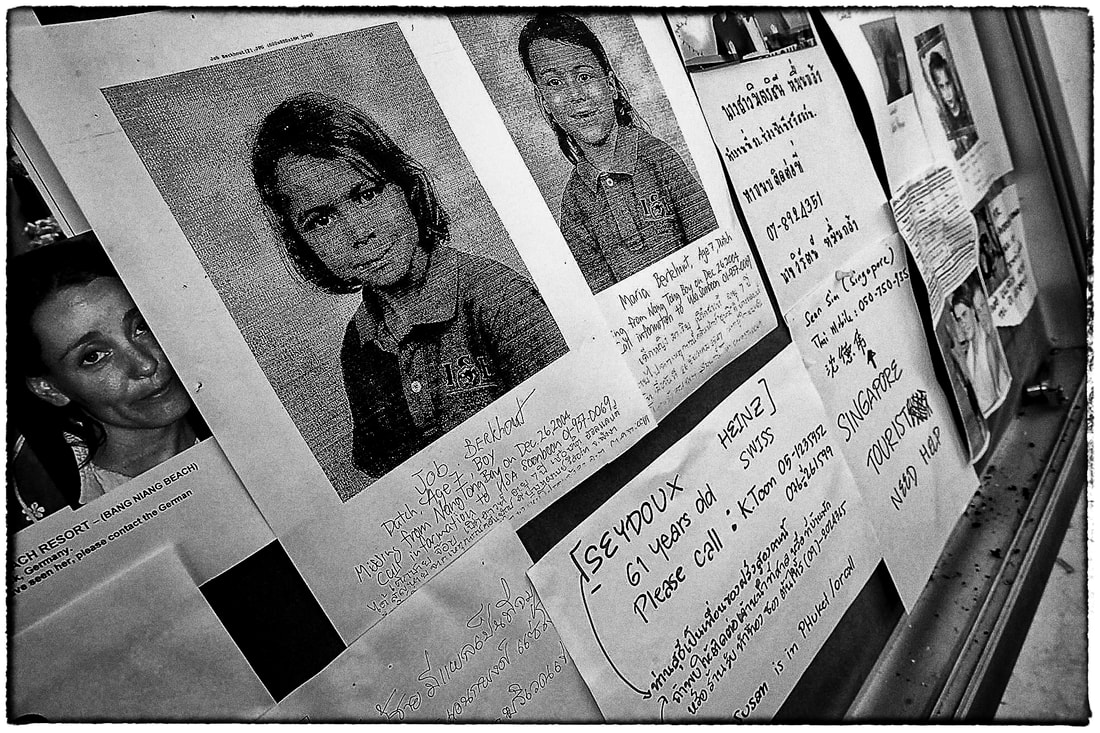 Photos of missing children and adults are tagged to a wall in a makeshift morgue following the 2004 Asian tsunami in Thailand. AP Photo/David Longstreath 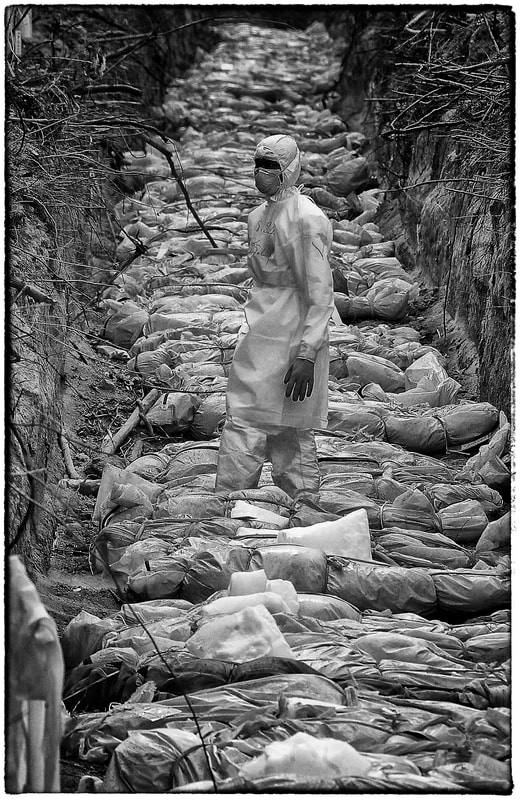